(read the full story below.)

Ron and I want to share the protocol that I compiled through Ron's health crisis. We feel strongly that the world needs to know that there are tools that work in this fight against Covid-19.  It's time people knew the truth and lives were saved!
To receive a free copy of our protocol please fill out your name and email address on the following form and you will receive the protocol email in PDF format.
You can use the Easy Links button below to get easy access to all the vitamins, supplements and supplies we recommend in the protocol PDF.

Additionally, you can click the Young Living button below to get the recommended essential oils products that will help support your immune system, health and wellness. It' s important to support our immune system that fights for us every day!

Thank you to our many family and friends for all of your love, care, encouragement and prayers! God worked a miracle and we are forever grateful!

In the next few days you will be able to read the amazing story of how we saved Ron's life. In the meantime, you can check the gallery below for a quick glimpse into the miracle that God orchestrated for our family.
NOTE:  If you experience any issues when filling out the form, please email anita@sparknewlife.com and we will get you the protocol PDF as soon as we can. Thank you.
Email anita@sparknewlife.com

As a family, we spent the first 18 months of this pandemic mostly on the fringe. A lot of time was spent researching, reading and, let’s be honest, stocking up on all things essential oils, supplements, vitamins and yes, toilet paper... LOL
Our family didn’t live in fear of it, we knew God was in control even when our world seemed so out of control, but there was an unknown factor in it all.
In July of 2021, our oldest daughter, Karissa, tested positive for Covid. It started as a sore throat, but then quickly became full body aches and pains with a low grade fever. For 10 days she quarantined in her bedroom, which she absolutely loved! (Seriously, the kid loves the solitude of her room and her lovely bed that feels like you're sleeping in a cloud!) Karissa was prescribed Ivermectin, a Z-pack, Pepcid and cough meds. I would bring in her meals and pick up the empty tray 3 times a day. I wore gloves and a mask to ensure that the family felt safe and none of the rest of us got sick. 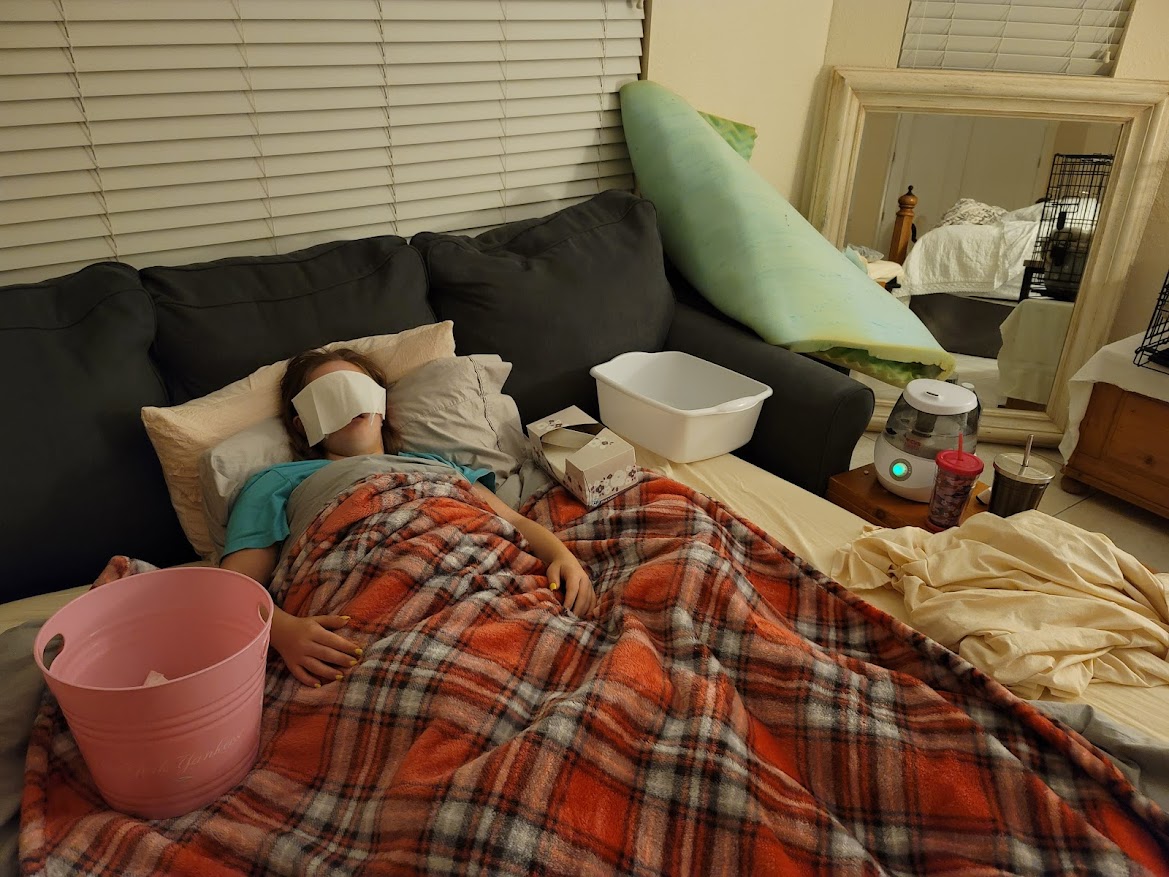 Thankfully, Karissa was well enough to join us all on our family vacation the first week in August and we thought it was all behind us. Then our youngest daughter, Kiersten, went back to school on August 10th and after two weeks back she came down with different symptoms that led us to believe that she had some kind of an intestinal issue. After a few days of upset stomach and vomiting issues, Kiersten also tested positive for Covid. It was a little harder to keep our little one in quarantine, as she has Down Syndrome, and with all of her symptoms it was inevitable that both Ron and I would become ill as well.
Ron and I both tested positive for Covid on August 25, 2021 and then our son, Caleb, tested positive on August 31, 2021. It was a family affair…unfortunately! However, we were grateful that our daughter in law, Diana, never became ill during this season of time.
In that first week, our bedroom was the quarantine room. It was Ron, Caleb, Kiersten and I all together so that we could at least help one another. By the end of August, both Caleb and Kiersten tested negative and were doing much better. However, Ron and I seemed to be going downhill.
By August 31st, we were both coughing so much, the weakness was extreme and the Covid brain fog was creeping in. In our cases it caused us to not be able to speak our words out loud in a way that made sense, while in our minds our words were clear, our thoughts precise, yet trapped, and we were unable to communicate well. Our breathing was labored and we were grateful for the use of my Mom’s oxygen machine for extra support. I had another telehealth appointment that Tuesday morning with the doctor who prescribed another dose of Ivermectin for me. By the afternoon, we decided that we needed to get to an ER for fluids and an assessment. Karissa drove us to a hospital in Martin County. It was there that we faced our first discrimination in regards to being Covid patients and also being unvaxxed.
For Ron and I Covid started out as a sore throat and headache, but then I quickly started going down hill. Severe body aches, fever, cough, no appetite, and OH MY - the weakness was terrible. Ron started out the same, but for the first week, he seemed to be kicking it much better than I was. In fact, the doctor said that Ron was “out of the woods”. We were prescribed Ivermectin, Prednisone, Pepcid, Budesonide breathing treatments for the nebulizer, Z-Pack and then following that was Doxycycline.
When we first departed for the hospital everyone was so worried about me, but I remember that it was during that trip that I took that 3rd dose of Ivermectin - the one Ron did not have. Upon arrival, we were both brought into a shared room in the ER in wheelchairs. The weakness was so severe and our lungs felt like we were being hugged so tight that we simply couldn’t inhale. Over a very short amount of time I could see that Ron was definitely NOT out of the woods, in fact, he seemed a little too deep in the woods. He could barely breathe in the mask that they required and kept having to remove it to get air. His coughing was increasing and he could barely talk. The doctor was rude, uncaring, and judgmental. Even though the doctor was fully vaxxed, wore 2 masks, a face guard, hospital gowns, a head covering, gloves, covered shoes, and stayed as close to the door as he could, he kept telling Ron (who at this point could barely breathe and could not stop coughing) to keep his mask on in order to protect the doctor.
Now, before I say anymore, I will say this - we get it - fear was everywhere. In our world fear had become what fueled every decision, overcame common sense, and separated families. It wasn’t even the doctor’s fault necessarily - they were being fed fear daily by the CDC, the NIH, the government, Fauci, the news and so many other outlets. Fear was the new normal.
They started an IV on me, then took blood from both of us and came in for a chest X-Ray. It was then that we learned that Ron had the beginning stages of Covid Pneumonia. When I tell you that we were then rushed out of the hospital, that is no exaggeration. Within minutes of Ron’s diagnosis, they unhooked my IV, which I had received about ⅛ of the bag and they brought a wheelchair for Ron and had me walk out of the ER because they didn’t want to wait for the second wheelchair. We were not even permitted to sit in the air conditioned ER waiting room for Karissa to return to the hospital to pick us up. It was the humid and the hot sun of south Florida beat down on us, stealing any ounce of fight we had left in us.
Within ten minutes Karissa arrived and brought us home. There was a sense of discouragement and also bewilderment. How could it be that in the United States of America we would be treated like a leper, not given any treatment or medicine and quickly ushered out to the street?
Over the next 48 hours, I watched helplessly as Ron became worse and worse. His coughing increased and without the assistance of the oxygen machine his oxygen saturation fell well under 90. While at the same time, I was having signs of improvement.

The rest of the story will be coming soon!